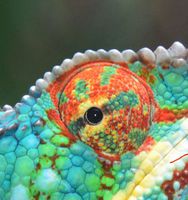 Chameleon lives, due to their very unique life history, depend on their eyes. Eye are their absolutely dominant sensory organ, taking part in securing the life of them as individuals and evolutionary lineage. As such, it has a unique structure (fused eyelids e.g.) and size, basing however on a standard lower vertebrate eye model.

The eyes:
* enable the chameleons to search for food,
* enable to use their special shooting tongue to feed,
* serve orientation in the environment,
* serve identifying threads and predators,
* take part in infraspecific and interspecific communication...
Chameleons:
* are very sensitive considering their eyes as they are of existential importance for them,
* retract the eyes into the orbits in stress or while seeing a predator,
* close the eyes while retracting the tongue with caught prey,
* close the eyes when it rains or when there is a too strong wind or too much dust in the air
* protect their eyes a lot.

In case some debris gets into the conjunctive sac throuugh the tiny opening in the eyelids above the pupil, they developed a special strategy called "eye cleaning" that looks really odd, and when seen the very first time, people might panic and think there is something wrong with the eye: the eyeball can be seeming to have fallen out of the orbit, it is turned very strange way... in few seconds, the eye gets back to normal shape. Chameleons have been observed to do this rarely in the wild (for obvious reason: they are rather shy, field studies are on chameleons conducted very scarcely and if, then usually not focusing on such a physiological detail), much more frequently, these observatins are reported from captivity. The general tendency and pattern is, chameleons that are exposed to hydration methods using pressurized water seem to do it very frequently (while the others less) with eyes contaminated with water and some even anthropomorphously report on them "loving it". The eye cleaning process can however be conducted also when no external water is present, so the presence of water is not crucial for executing it. A rather different mechanism seems to be the initiator of this act, namely heavy discomfort from somethjing IN the eye that should be vigorously pushed OUT. It can be debris, piece of skin, dust, but (sic!) it can be water too!

In 2002, two veterinarians, Coke and Couillard, published a very interesting and high level publication on the ocular biology and diseases of chameleons. While the paper seems excellent and despite almost 20 years passed, building still a well referable source of information, they allowed themselves a sinful fabulation:
"In nature, chameleons correct the problem by drinking excessive water during rain showers. The water is flushed from the oral cavity, up the choana, through the nasolacrimal duct, and out into the conjunctival sac. The eyes greatly bulge outward and rotate, allowing the water to flush the conjunctival sac. In captivity, this process can be simulated by placing the chameleon in the shower, outside under an artificial sprinkler system, or outside during a light rain."
This statement caused two decades of misleadings in understanding how and why chameleons clan their eyes in fact, cited and parotted uncritically by many.
Anyone understanding vertebrate cranial anatomy and physiology can easily see that the statement is absolutely false. There is namely no way how the water could pass the described way.
First, the water would have to be transported bottom up...
Second, the nasolacrimal duct (canalis nasolacrimalis) is extremely tiny and would be passable for such ammount of water only under pressure! And, there is no way how to create this pressure, as even if it would be possible in the mouth cavity through the action of hyolingual apparatus to increase the pressure, the only option how the water would be presurized to pass through the nasolacrimal duct to the conjunctive sac is, the nostril would have to be blocked! And, for this, chameleons do not possess any anatomical structure to do, they can not purposefully block the nostrils... Therefore, any pressure cased in mouth cavity directed in the nasal cavity is easily made inefficient by being immediately neutralized by the exspelling air or water through the nasal cavity and nostrils outside of the body leaving the nasolacrimal duct closed. The mechanism is equal to equalizing in human scuba-diving practice: in order to create a high pressure in the mouth and nose for equalizing the pressure on the inner and outer surface of the ear-drum via Eustachian tube (tuba auditiva), it requires an artificial closing of the nasal opening in squeezing the tip of the nose between the thumb and index. So, though published and even falsifying the fct nothing like that happens in the wild, they brought this to attention of herpetoculturists that started vigorously expose the captive chameleons to "shower, outside under an artificial sprinkler system" as advised, using the automated or hand-operated misting systems full of highly pressurized water. And - heureka - the chameleons started to clean their eyes!

Now, what is the reality...

Do chameleons rinse rheir eyes?
Of course they do!

However, the most important question is: "Why they do so?"

And this is what they DO NOT!

If anything irritating is getting into their eyes and they need to rinse them, they produce tears, which are produced by the tear glands (singular: glandula lacrimalis) into the conjunctive sac and increase the pressure there and are exspelled either through the eye opening or through the ductus lacrimalis to nasal and mouth cavities.

The reason why we see so often chameleons "clean" their eyes in captivity is because we make their eyes moist with misting unnatural way mainly, we forcefully focilitate the process of the misting water penetrating the eyeballs either directly through spraying or through forming water drops accumullating around the eye opening. This almost never happens in the wild, as the rain is not pressurized and falls from above and not from other directions. Plus in more than 50% of the cases, when it rains, it is night and the eyes are closed. Even if it rains at daytime, according to my 30 years of field observations, most chameleons hide from rain deep in the shelter of canopies of trees and bushes and due to the fact, the temperature cools down and the light conditions become worse, they reflexively start sleeping as if it was night...
In aptivity, the hypotonic water gets into the eyes and starts to itritate them (same as your eyes would be irritated and would burn if you put rainwater or simply sweet water into them!!! Try yourself how it feels - you will also produce tears and want to get rid of that irritating hypotonic water! Our eyes and chameleon eyes are very delicate and are moistured only by isotonic tears, not by hypotonic rainwater or sweet water)...
And THIS IS WHY they rinse their eyes.
Noone ever has reported a chameleon seeing a source of water to go deliberately there and open the eyes take in water and rinse their eyes. Noone ever could prove that they get, as the above memntioned VETs state, they take water into mouth and transport it to the eyes and flush tem. It is absurd and it does not happen.
The only vertebrate doing such thing is based on my knowledge the human. So, we might get anthropomorphic and want to believe that chameleons do the same for the same purpose. But they do not!
Conclusion
Chameleons do clean their eyes in order to remove various iritating substances in general. In captivity, in particular, they clean the eyes so often predominantly due to unnatural forceful exposure to pressurized or on-eyeballs-accumullating water.
https://www.reddit.com/r/Chameleons/comments/8wta9x/chameleon_cleaning_eye_with_water/