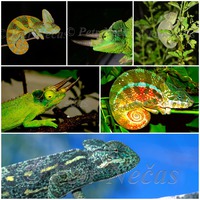 Chameleons inhabit naturally-autochtoneously three continents:
Africa incl. Madagascar and many off-shore Islands (vast majority of species)
Asia (from ear East to India and Sri Lanka) and Europe (here only some eastern Mediterranean islands)...
Thanks to humans, the have been introduced to a series of countries, sometimes intentionally (for fun, for wild harvesting), sometimes as an incident (escapees, abandoned specimens after hurricanes or unwanted pets...) and in some territories, they were capable of building a more or less stable and reproducing populations, sometimes "thriving" and even expanding to other territories, and/or considered "invasive species", sometimes not doing especially well...
Sometimes, finds of live or dead animals are reported (CZ: C. Calyptratus, T. hoehnelii; CH: C. chamaeleon; GB C. calyptratus misidentified as F. plus flight ardalis; Spain: Mallorca: C. calyptratus; Indonesia, Bali: C. oshaughnessyi, C. brevicorne etc.)

There is a (very likely yet incomplete) list of the known feral populations of chameleons: