Handling A Hemipeneal Plug In Chameleons 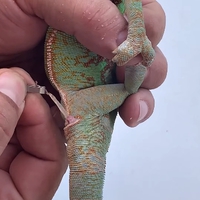 Male Chameleons possess two copulatory organs called hemipenis. In relaxed state, each of them is drawn back to special pockets at the base of tail.
When the chameleon sheds the skin, the surface of hemipenis is shed too. But, as the surface of the hemipenis is reversely retracted into the pocket, it is shed inside the lumen of the retracted hemipenis. While defecating, chameleons often slightly evert the hemipenes and rub the shed off on a branch, but sometimes they do not. Then, the hemipeneal shed stays inside the hemipenis and get stuck there. It may last one, two - to many sheds and a plug, called "hemipeneal plug" forms.
Due to wrong interpretations in other forums parroted uncritically further, this term is mixed with the incorrect term "Sperm plug", which has a completely different meaning, structure and function and is formed during copulation by a thick, jelly-like, fraction of ejaculate (sperm) in some reptiles and even mammals to endorse their reproductive strategies.
Now, if the hemipeneal plug forms, it is usually harmless initially,
Can het a serious trouble if ignored
And left untreated.
It may make the male unable to evert the hemipenis and unable to mate.
Later, it can cause infections and cause either unhealable hemipenis infections that may lead to necessity to amputate it or even to death.
How to diagnose?
Usually, you notice sometimg dry is sticking at the cloacal opening.
In later phases, the hemipeneal
Bulges can get unusually swollen.

1. Take a piece of cotton and soak it with water. Fix it above the cloaca with medical tape and let the cloacal area get moist. Best do this at the evening, as the animal will sleep and not try to get rid of it.

2. Remove the cotton and tape and make a gentle massage of the hemipeneal bulges

3. Draw the skin of the underneath of tail at the hemipeneal bulges a bit towards the tip of the tail to slightly open the cloacal fissure.

4. Take a pincer and grasp the dry partnof the hemipeneal plug firmly

5. Draw the pincer towards the bead parallel to the body axis slowly and gently to pull the whole hemipeneal plug out

6. Always check the other side too, if the hemipeneal plug forms, it is usually formed on both sides

No need to desinfect, no need to put any ointment unless the area is evidently inflammed

As this act is so easy, you do not need to get with this issue to the VET.

How to prevent?
There is no special prevention measure other than proper husbandry, proper feeding, supplementation and hydration and observation of your animal.
Author: Petr Nečas