The Strange Occipital Flaps: What Is Their Structure and Function? 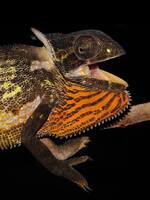 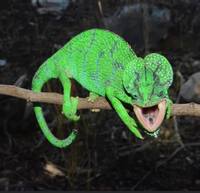 Amongst chameleons, some species of the genera Calumma, Chamaeleo and Trioceros possess a strange structure on the back of their heads: the occipital flaps.

The occipital flap (lobus occipitalis) is a skin duplicature of a semilunar shape, attached to the head at the back of the skull, along the causal margin of it, freely hanging over the neck and partly covering it. In some species, they are smallish, with the largest width much les than the orbit diameter (e.g. C. nasutum or Ch. gracilis) butnin some species, it grows to a big-sized elephant-ear-like formation reaching the flanks (e.g. C. cuccullatum; Ch. monachus; T. melleri).It is covered by scales of standard size, always in the case of the hidden aide attached to neck and in the case of small occipital flaps in some species outside, while in the case if large flaps, the scales on the outer side, can be remarkably enlarged.The occipital flaps are in many species movable and can be everted to right-angle position to the body axis, in some species (e.g. T. melleri) they can be even shaken and vibrated.

Based on decades of research and observations, there is a passive and active way how the occipital lobes work in fact.

Passive function
The size and form and movability of the lobes is species-specific and serve as a part of the character-displacement for species-and sex recognition amongst syntopic species. There is no chameleon cenosis, where the head ornamentation of syntopic species would be identical or even similar. So, based on the combination of presence-absence and/or shape of cranial protuberances like horns, casques, enlarged scales, skin flaps and occipital flaps, the species can easily recognize each other and prevent cross-breeding.

The movability of the flaps is used in three typical behavioral patterns:
A. Male-male intimidation and combat.
B. Male-female imposing/rejection.
C. Anti-predatory mechanisms.
In all cases, the flaps are moved or vibrated or erected, in the cases A and C, the erected occipital flaps allow the head to appear much bigger from the frontal view. The occipital flaps movements and exposure is usually not isolated but part of more complex behavioral mechanisms, combined with other head and body movements, hissing, exposing jaws or temporal glands etc.