Why Do Chameleons Live Longer In Captivity Than In The Wild? 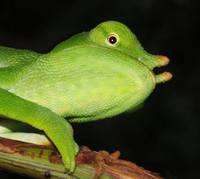 Let us be candor now.
The keeping of chameleons in captivity is, with the exception of a handful of species that are well established in breeding programs, and with the exception of few top specialists, actually a disaster. Most of the chameleon species do not survive the after-import adaptation process and very few reproduce. On contrary, once we replicate the natural conditions properly, those species, which are well established in captivity, live in captivity much much longer then in the wild. The Yemen Chamaeleon can live up to 16 years, while in the wild, the most animals die before they reach their first year of age. While the Panther Chameleons live in the wild for 2 to 4 years only they can live up to 10 years in captivity.
And, people ask:
why is that?
Is there nothing wrong with chameleons reaching multiples of their normal lifespan in captivity?
Is it the natural?
Is it right?

Why do chameleons die in the wild?
(...and why they live longer in captivity and not in the wild as a rule, when we get the idea on how to manage them?)

And the answer is SIMPLE AND OBVIOUS:

So, with the exception of the last one, none of the factors, the absolute VAST majority of chameleons die because of is natural and internal and concerning inner powers of the organism! All they are external! The last one fits only to those species that lay eggs and can afford to do without breaking the continuity of the evolutionary lineage, as they care for offspring and continuation.

So, THIS IS what makes them die sooner in the wild: predators, parasites, diseases, humans and their influence MAINLY.

And as it is unethical to expose captive animals deliberately to disease, predators, parasites and harsh conditions causing their death - here we go:
THEY LIVE LONGER!
It is Not a miracle
It is No contradiction
The reason is so simple
And easy as is explained here.
Author: Petr Nečas